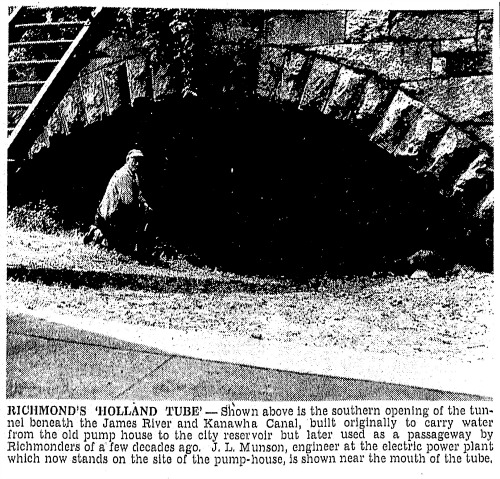 Most Richmonders who marveled at the building of the great Holland Tube under the Hudson River in New York don’t know that Richmond had a tunnel under a flowing body of water long before the New York tube was even a dream.

The James River and Kanawha Canal, which flows over Richmond’s tunnel, isn’t quite as pretentious a body of water as the Hudson, and the tunnel itself could be lost in one little segment of the New York tube. But the underground passageway beneath the muddy waters of the James was in use when the Yankees stormed into the Confederate Capital nearly 75 years ago and it fairly oozes history form the cracks between the huge stones with which the arch is constructed.

If you would see Richmond’s tunnel, drive out the old Tredegar Road along the canal to the city’s electric power plant, located just across the canal from Hollywood Cemetery. The southern mouth of the tube opens only a few feet from the entrance to the plant.

Seeping through the cracks in the roof and mixing with the coal dust on the ground comes water from the canal above. There is a continual dripping of water from the roof which is about six feet high in most places. The passageway is approximately 18 feet wide and about 110 feet long.

But along the now muddy ground in the tube used to walk gaily dressed ladies escorted by handsome young swains. They came from the Hollywood side and used the tunnel to get to the dance pavilion which adjoined the old pump house. J. L. Munson, engineer at the power plant, which now stands on the site occupied by the pump house, remembers seeing the pleasure-seekers come through.

Mr. Munson remembers also how the tube once was used as a passageway for coal cars which brought fuel to fire the steam boilers in the plant. But the arch was old even then, according to the story of the structure told yesterday by George H. Whitfield, director of the city Department of Public Utilities.

Construction of the old pump house was begun in July, 1830, under direction of Albert Stein, identified in history only as “a foreigner,” Mr. Whitfield said. The building was completed and put into actual use in February, 1832.

From the records of the department comes the story of difficulties which led finally to the construction of the underwater arch.

When the pump house was first put into use, water was pumped to the reservoir through pipes laid under the canal. But the pipes rotted and necessitated frequent and costly repairing, the records indicate. So in 1854, an iron bridge was built over the canal and the water lines ran across the bridge. Here, again, difficulties arose when the piers upholding the bridge settled into the water.

Finally in 1857, work was begun on the tunnel in order that the pipes might be laid under the water and yet not actually in the water. A number of pipes were laid, and everytime a new pump was installed in the pump house, another water line was carried from the building to the reservoir.

Later, when the pump house was moved to its present location near Byrd Park, the pipes no longer were used. However, there are at present two lines carrying water from the reservoir to South Richmond, one being the main water line to that section.

When the power house was built, the tunnel began playing a new role. Through it came the coal used to fire the steam boilers. At first, the fuel came through in small cars carried by cables. Later, motor cars ran through on wooden rails. Parts of the rails still may be seen along the ground inside the tube.

About 12 years ago, steam turbines were installed and use of the four boilers discontinued. Water power replaced fuel power, and coal was brought through only in emergencies when the other power failed.

One of the emergency periods is very recent history. During the flood of 1936, the steam boilers were put to work for four days. The coal used came by truck up Tredegar Road and not through the old tunnel, however.

When the steam turbines were used regularly, approximately a ton of coal a day came through the tube, Mr. Munson said. It was brought by train along a side track now removed, and piled up on the north side of the passageway. From there it came through the tube to the plant.

Besides running beneath the canal, the tunnel also is under two sets of Chesapeake and Ohio Railway tracks. The north end is higher than the other end and the tube walls were built in segments to care for the drop.

Today, the tunnel is of no utilitarian value. It is not even useful as a passageway from the Hollywood side to the power plant, since there is an almost vertical bank at the northern end with no steps leading to the top from the mouth of the tube.

But the tunnel still stands, serving at least as a reminder of a Richmond that once was, and of the fact that what today is of great value may tomorrow, in the wake of progress, be forgotten.