He left this city yesterday for his health, having suffered a month or two from rheumatism and the consequences of overwork. Though feeble when he started, he was able to walk from the street cars to the depot to take the train at noon yesterday, Dr. Acker accompanying him to the station. The trip proved too severe a strain, however, and he died at 8 o’clock last evening, just twenty minutes after his arrival at the hotel.
Death was caused by failure of the heart, superinduced no doubt by the fatigue and excitement of so extended a journey, combined with his age.

Dr. Garnett was born in Essex County, Va., September 19, 1820. He graduated from the University of Pennsylvania in 1841. He secured an appointment as assistant surgeon in the navy, and for five years cruised all over the Pacific Ocean. In 1846 he came East and was stationed at the Navy-Yard in this city. A year later he resigned his position and began practicing.

Dr. Garnett acquired a high reputation as a physician and surgeon in this city before the breaking out of the war. He numbered among his patients many Representatives and Senators, and was Jeff. Davis’ medical Attendant when Secretary of War. He was a man of strong convictions and ardent sympathies with the South, and believing that secession was right, abandoned his practice here and joined his fortunes with those of the Confederacy.

There he was made Surgeon-General, and was Mr. Davis’ private physician during the entire war. After he went South, his property in this city was confiscated, but some of it was recovered after the war was over. At the breaking up of the Confederacy he returned here and at once acquired a very large and lucrative practice, becoming the family physician of W. W. Corcoran. His knowledge of the interior working of the affairs of the Confederacy was very great.

While in the navy he married Mary Wise, daughter of Henry A. Wise, Virginia’s famous Governor. He leaves two children, Henry Wise Garnett, a well-known lawyer of the District, and an unmarried daughter. Dr. Garnett during his lifetime occupied many positions of prominence in the medical profession. He was president of the American Medical Association for one year, and also of the Medical Society and the Medical Association of the District. He was chairman also of the Committee on Arrangements at the International Medical Association recently held in this city, and a member of the Climatological Society.

Dr. Garnett enjoyed a large and lucrative practice among all classes of citizens without regard to section, and enjoyed high social as well as professional standing. As an illustration of his generous sympathies toward his old comrades-in-arms, it is said of him that he never charged or took a fee from an ex-Confederate soldier.

The venerable Dr. Toner has been a friend of Dr. Garnett’s for 33 years, since 1855, and he said this morning that the dead doctor had always had a leading practice. “He was,” he said, “a man of high culture and social acquirements, beyond most men in or out of the medical profession. From this fact he was the most popular family physician and a most pleasant and agreeable companion. He was exceptionally well posted on all questions of interest in polite society, and he had the ability in any company to make him a leader in conversation.

“He has filled all the positions of importance that are open to a medical man in the city. He was physician to hospitals, lecturer and professor in colleges and a writer of much note in medical literature. He has been at the head of almost all the medical organizations in our country of a national character.

“A fact not generally known is that he used to be the physician to the old U. S. penitentiary on Arsenal Point, way back in 1859. He was a characteristic Southern gentleman, very punctilious and chivalrous, with a keen sense of honor that would keep him from participating in a wrong of any kind.” 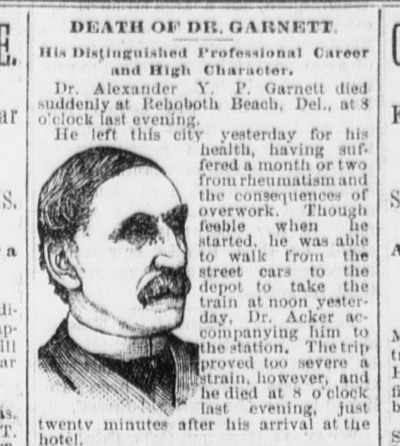