Police are working on every possible clue which might lead them to the slayer of John Ernest Krengel, 69-year-old pattern maker at the Tredegar Iron Works, whose body was found early Wednesday hidden in a second floor supply room at the plant after a night-long search.

Detectives described the killing as “one of the dirtiest murder cases in the history of the city.”

Circumstances indicate that the aged pattern maker was slain sometime before noon on Tuesday, although his body was not found until 7:45 A. M. Wednesday, Detective Chief O. G. Garton said.

The victim evidently was lured from his shop in the pattern building to the supply building, where, Chief Garton said, he was “knocked in the head with some blunt instrument which the coroner said was not enough to be fatal.”

“Knocked Down and Carried”

“We have every reason to believe that he was knocked with the blunt instrument on the first floor, and carried to the second floor and there with a .22 caliber gun, the assailant shot Mr. Krengel in the brain,” Chief Garton said, and added that evidence showed that the gun was placed directly against his head.

“His body was lying on the floor under supply shelves and there it was covered with a window sash, and another window sash placed so as to “conceal it” completely, the chief explained.

In making the examination, police found that whoever carried the body from the first floor to the second floor had paused at the top of the steps because the imprint in the cement dust on the landing. The same dust was found on the man’s body.

“The motive in our minds is that the murder was for robbery,” Chief Garton said, “because it was a known fact that he carried a large sum of money on his body and when we searched the body we were unable to find the billfold in which he generally carried his money.”

As to whether the slaying was done by someone in or out of the building, Chief Garton would not speculate, but he added that it certainly was committed “by someone who knew in advance of his carrying sums of money.”

Police said that the killing must have occurred “before noon Tuesday” because Krengel’s lunch box was in order and his tool box open.

Chief Garton affirmed that the slayer must have gotten Mr. Krengel into the supply building on some false pretext because Mr. Krengel was known to always work alone, and “stick faithfully to his bench.”

Police, members of Mr. Krengel’s family and persons with whom he worked all placed emphasis on the fact that the victim was a “man of distinct habits,” in that he was always on the job and came and went at a certain time.

Mr. Krengel’s faithfulness to habit seemed to be the reason that his fellow workers were alarmed at his disappearance as early in the day as they were. Workers at the Tredegar Iron Works started the search around 8 P. M. and after their search proved futile, police were called in by company officials. The buildings of the company were searched all night long by Police Lieutenant C. A. Nunnally and Officers L. K. Nuckols and C. B. Tingle. The body was found after a night-long search by N. P. Dowdy, a machinist at the iron works.

Members of Mr. Krengel’s family said that it was one of his eccentricities to carry around large sums of money, but they had no idea as to how much he had on him at the time he was killed.

They declared that he always came home from work at a definite time, but somewhile back he had told them that if “a certain machine broke down he would have to work later than usual.”

About 7:40 P. M. Tuesday his family called his shop to find if he was still working. According to the family, the night watchman when answered the phone, said that Mr. Krengel was still at work because his car was still parked near the building.

Then about 10 P. M. the family became alarmed because Mr. Krengel always called hom if he was to be that late, so another call was placed to the iron works. Meanwhile, the night watchman had made another round and found that Mr. Krengel was not in his shop and that his door was open. The practically every employee turned out in search.

I. A. Kinsey, Tredegar superintendent, who called in police, said that everyone who came on the premises of the company had to wear a badge of identification and pass a guard at each entrance, “although now and then some people did get in without anyone knowing it.”

Chief Gorton said that Detective Lieutenant L. C. Haake and Detective Sergeants E. A. Kelley and C. L. Brown had been assigned to the case and all detectives had been instructed to get whatever information possible.

Mr. Krengel is survived by his wife, Mrs. Mary A. Krengel; one stepson, Conrad Howle; one brother, Charles F. Krengel; one sister, Mrs. L. W. Francis, and several nephews and nieces. Funeral services will be held at 3 P. M. Thursday at the Joseph W. Bliley Funeral Home, and burial will be in Riverview Cemetery. 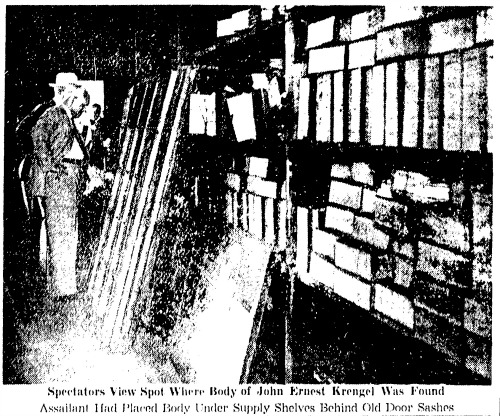